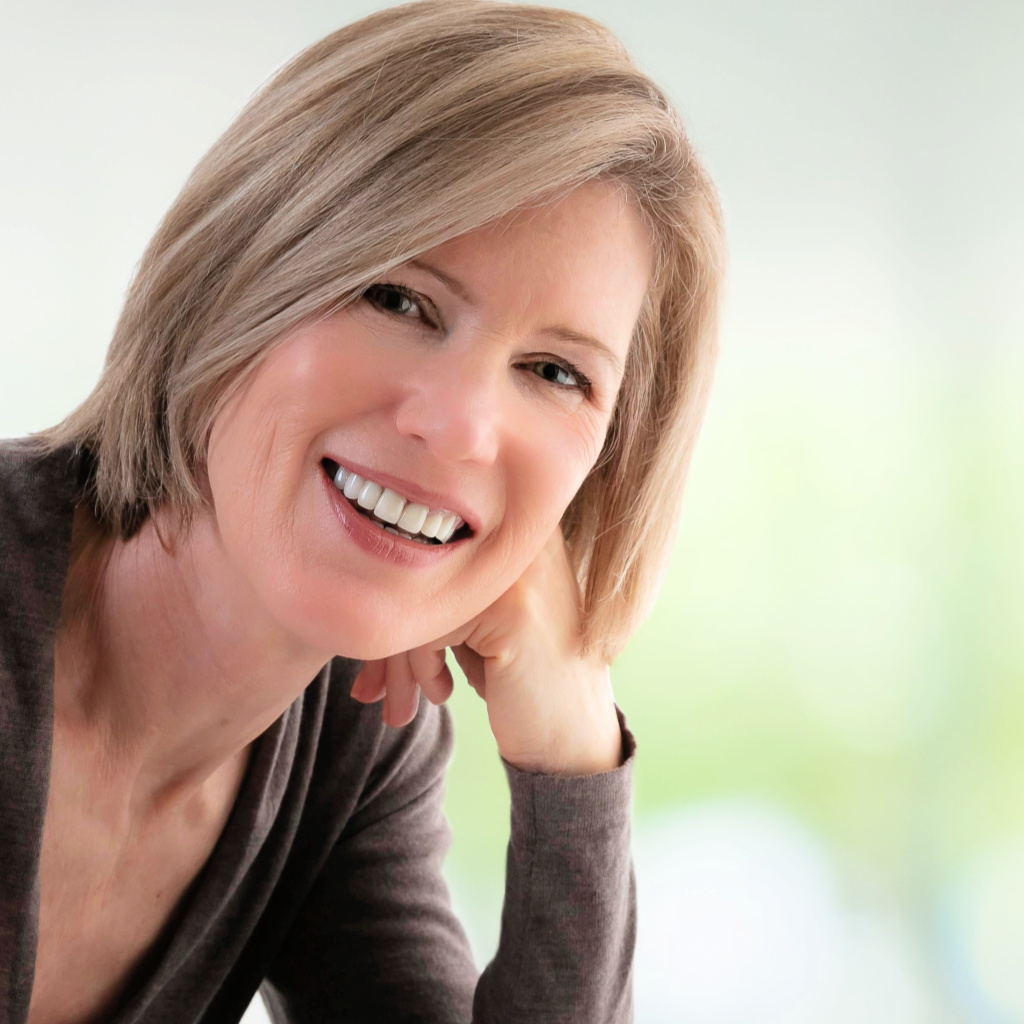 Only a few months into 2021, Writing for Children & Young Adults alumnx Sandra Nickel has already received numerous accolades for her recent nonfiction picture books The Stuff Between the Stars: How Vera Rubin Discovered Most of the Universe (Abrams Books for Young Readers, 2021) and Nacho’s Nachos (Lee & Low, 2020). In a digital interview with Nickel, we spoke to her about her projects and their success, the importance of writing about historical figures through a picture book lens, and what we can all see between the stars no matter our age. Below are edited excerpts from our conversation.

ON HER MOST RECENT BOOK, THE STUFF BETWEEN THE STARS

The jacket flap copy of The Stuff Between the Stars reads:

Before Vera Rubin discovered most of the universe, she was a girl who loved the night sky. She watched the Big Dipper circle the North Star. And when her eyelids grew heavy, she dreamed not about what she had seen, but about what she had not seen. She dreamed about the mysteries between the stars… 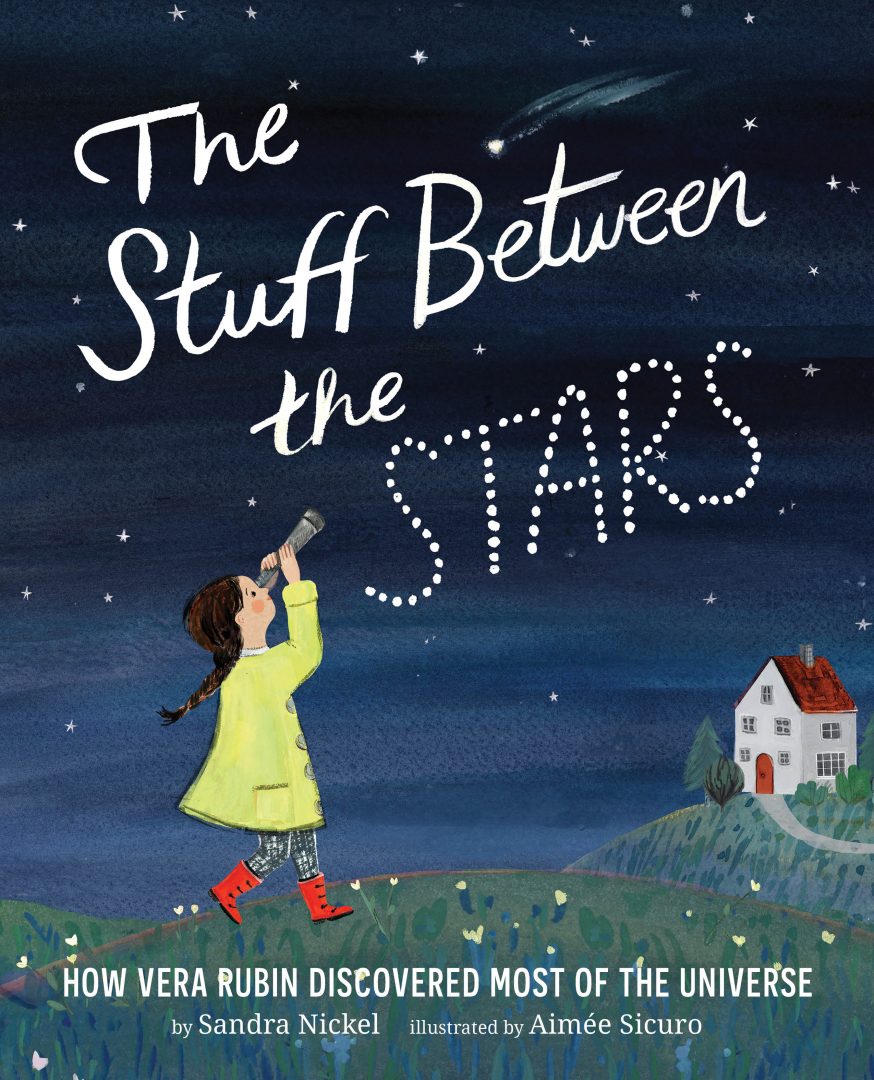 …The Stuff Between the Stars tells Vera’s incredible story, celebrates her brilliance, and shows how a girl’s never-ending love for the night sky changed the way we see our universe today.

My interest in Vera Rubin started with a New York Times eulogy that came out two days after Vera Rubin died. (It was sent to me by Kate Hosford, VCFA 2011.) It talked about how she revolutionized modern physics and astronomy. Yet, as I read, Vera was completely relatable. She moved slowly in her career as she raised four kids. She still got excited by small discoveries. She wondered whether she was fascinated by galaxies simply because they were beautiful. The more I read about her, the more I… I just liked her.

She also worked in a field where huge barriers existed to keep women out. In fact, even after she proved the existence of dark matter, she was passed over time and again for the Nobel Prize in Physics, as it was given to men for a good forty years and never a woman. The injustice of this was the main reason I decided to write her story.

ON THE IMPORTANCE OF WRITING ABOUT HISTORICAL FEMALE FIGURES

There’s still a lot of history and bookshelves that need to be expanded to include women. A 2011 study conducted by Professor Janice McCabe looked at 6,000 children’s books published between 1900 and 2000 and found that male central characters outnumber female central characters by nearly two to one. That’s twice as many stories about male central characters. Although there has been some progress, many of the classics—Where the Wild Things Are, The Very Hungry Caterpillar, Winnie the Pooh—will forever and always remain stories centered around male characters.

Fiction picture books with female central characters are impactful because children not only hear the stories, they see them. The simple fact that a story centers around a female character attests to her importance. The unspoken message is she is important; her story is important. Nonfiction picture books about women have double the impact of fiction because they can be read for the simple joy of reading and be used when talking to children about science, art, or history. The unspoken message goes from she is important to she is very important. She is real. She is part of our history. She did it, and so can I.

ON THE IMPORTANCE OF LOOKING AT THE STARS LIKE VERA RUBIN

When I talk to kids, I show them this photo and ask what they see. If you’re not in a rush, take a moment and look. 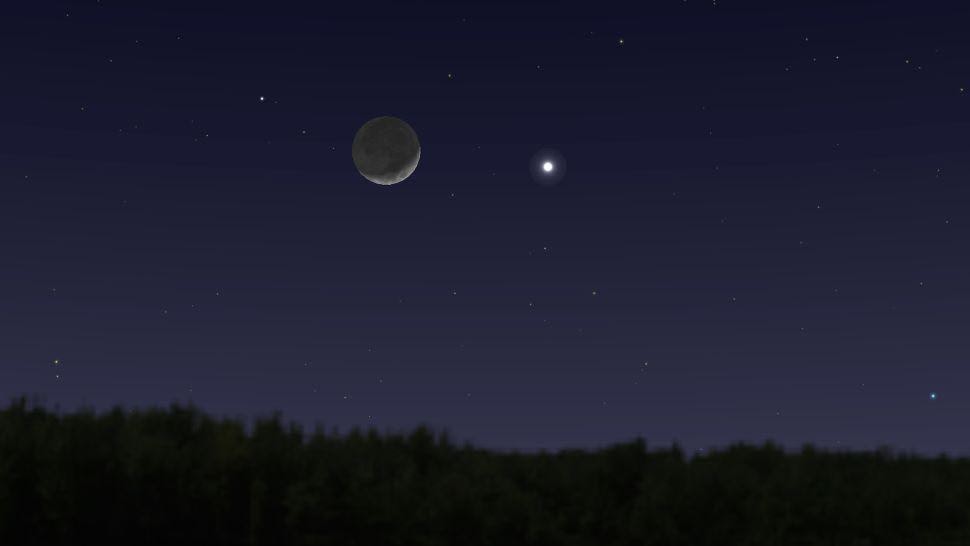 We see the moon. Stars. Trees. Some kids figure out the bright “star” is Venus and say, “a planet.” And that’s it, right?

No one ever mentions the darkness.

Vera said, “Nobody ever told us all matter radiated. We just assumed it did.” I love this so much—this idea that we don’t see the obvious because we have decided the world is a certain way. How would the world look if we all did as Vera did? If we didn’t focus on the stars, but the mystery between the stars?

Before I learned about Vera, I never once thought about the eighty percent of the universe that doesn’t shimmer or burn. When I look beyond the moon, stars and Venus now, I feel my whole world opening up, my whole heart. And when the moon sets and the sun comes up, when I begin my everyday things that I’ve always done the same way, I’m trying very hard to see what I’m looking past. I’m trying very hard to notice the mysteries and delights that don’t shimmer.

The Stuff Between the Stars is a real testament to the community that exists among VCFA alumnx. Kate Hosford, who I met my first semester at VCFA while waiting in the lunch line, sent me the New York Times article I referred to above and suggested I write a picture book about Vera Rubin. Other VCFA alums critiqued the story until it was ready to go to my agent, Victoria Wells Arms, also a VCFA grad. When the story went out for submission, several editors were interested (it even went to auction), and it eventually went to Maggie Lehrman, yet another VCFA grad, who is both a writer and Editorial Director at Abrams. So, you see, from birth to publication The Stuff Between the Stars was enveloped in a cocoon of VCFA support. It is a gift to know your story—especially at its fragile stages—is in trustworthy and accomplished hands.

There is a rare generosity that exists among the Writing for Children & Young Adult alums and faculty. Kate Hosford writes picture books and easily could have put the Vera Rubin idea in a file for later. She gave it to me instead. When I need advice, I don’t hesitate to contact a VCFA grad or member of the faculty—even if it’s someone I’ve never met in person. Writing can sometimes be a lonely affair, but for those of us who have graduated from the VCFA WCYA program, it seems less so. I know I’m never really alone. There is this vast, warm community of writers I can call on—and they will answer with boundless generosity.

ON HER GOLDEN KITE AWARDS RECOGNITION FOR NACHO’S NACHOS

From the Society of Children’s Book Writers and Illustrators website: 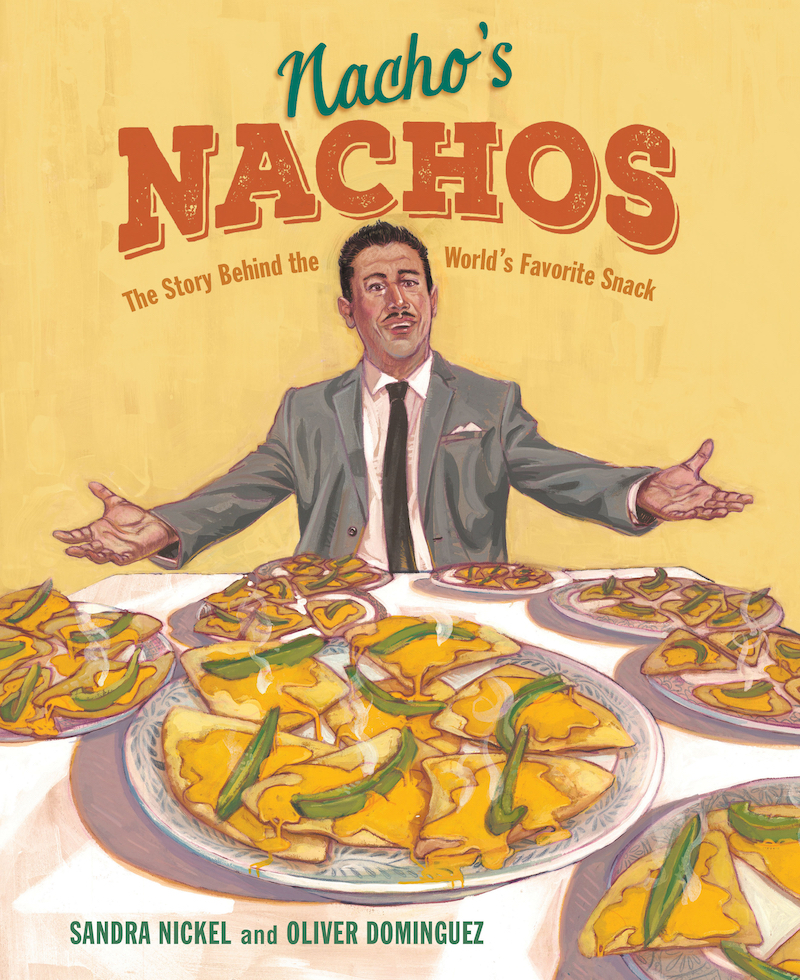 This is the first year SCBWI announced finalists, rather than simply one winner. Lee & Low, my publisher, submitted Nacho’s Nachos for the award, although I didn’t know it had.

For Nacho’s Nachos, I did a lot of research. After several months, I was able to locate and talk to the family of Ignacio “Nacho” Anaya, the inventor of nachos. I traveled to Mexico. I spoke with the families of the other main players in the book. I gathered photos. I discovered three archived newspaper articles for which Nacho himself had been interviewed. The family shared photos of Nacho, which were nowhere on the internet. It really felt like investigative reporting.

Because of all this research, I was able to tell the story of how nachos were invented—a story that had nearly been forgotten by history. For me, being a Golden Kite finalist is all about Nacho Anaya. Yes, it’s affirmation of the research I did. Most importantly, however, I believe I was named a finalist for telling the world about Nacho. The bright shiny Golden Kite Finalist sticker will hopefully mean more people will discover him, which is the best part. He deserves to be known far and wide for the joyous snack he gave to us all.

ON HER UPCOMING PROJECTS

I have a second book out about a woman in STEM coming out at the beginning of 2022. It’s Breaking Through the Clouds: The Sometimes Turbulent Life of Meteorologist Joanne Simpson. Joanne was a contemporary of Vera Rubin and the first woman to earn a doctorate in meteorology. Like Vera, she faced enormous resistance from the men in her field. They thought her interest in clouds was, well, “fluffy.” She proved them wrong. Her work with clouds showed the enormous power they contain and sparked an entire new branch of science. Also like Vera, Joanne was a role model for young scientists. One female meteorologist who prospered because of Joanne said Joanne didn’t simply blaze a trail for women, “she blazed a road.”

ON HER ADVICE FOR WRITING NONFICTION PICTURE BOOKS

The greatest advice I can give is, make sure you love your subject. Most people don’t realize how many months of research children’s book writers put into their nonfiction. You’ll be spending a lot of time with your protagonist or topic, first through research, then while writing, then through talks with students.

I just recently dropped a nonfiction biography project that I had researched for months, written, and even taken through a round of submissions. I sat down to revise for the next round and couldn’t do it. I just don’t like this person. He did something incredible, something unique and groundbreaking. But he was cold and self-focused, and I simply do not want to be his ambassador to children. Thus, my advice to love your subject—be head-over-heels in love with it.

You can find links to Nickel’s books and upcoming releases at sandranickel.com.

Read more stories about our Alumnx through our Alumnx Success series. Interested in an MFA in Writing for Children & Young Adults? Visit our program page for more information on our VCFA graduate degrees.